Annif / Finto AI as a Service

University of Jyväskylä / The JYX Repository

The Finto AI/Annif API service is already being used in the JYX repository of the University of Jyväskylä, where it is used to assist the subject indexing of Master's theses. Students uploading their thesis get suggestions for subjects, which they can then select and modify. The final subjects are confirmed by a librarian. 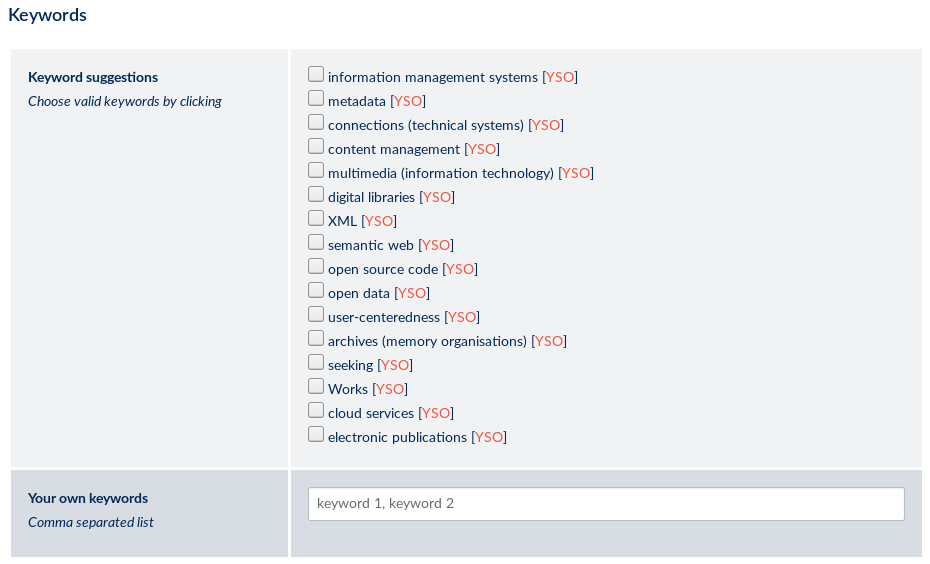 Repositories Maintained by the National Library of Finland

Annif / Finto AI is being piloted at the Osuva repository of the University of Vaasa. Osuva is one of the the repositories maintained by the National Library of Finland's Repository Services. The pilot started in the spring of 2020. The integration was extended to the Trepo repository (University of Tampere) and the Theseus repository of the Finnish Universities of Applied Sciences. The workflow is similar to the one in Jyväskylä: Users upload their thesis and get suggestions for subjects. The user is then able to choose the best suggestions and add their own if necessary.  There's a demo video at http://urn.fi/URN:NBN:fi-fe2020042219855 that shows how users can upload to the Osuva repository after Annif has been taken to use.

Kirjavälitys Oy is using the API service for generating metadata about upcoming book titles on the basis of available marketing and presentation texts. Kirjavälitys offers logistic, wholesale and digital services for Finnish bookshops and web shops, libraries and schools, domestic publishers, printing houses and outsourced logistics service clients. As books can be pre-ordered online, metadata about upcoming publications is useful to ensure they can be discovered.

Finto AI has also been integrated in the museum collection management program Collecte. Museum materials are described through Collecte, where users can write their own descriptions of the material in question. Now the description work is aided by Finto AI’s suggestions based on this free text. Finto AI gives the user suggestions based on the General Finnish Ontology (YSO).

Annif as an Independent Installation

At the end of November 2021, the Finnish Broadcasting Company Yle revealed that it is adopting its own Annif installation trained on Yle’s Finnish and Swedish articles. The lexicon used is Yle’s own and is based on KOKO ontology and Wikidata. Yle’s content creators can choose the keywords they want for their textual contents from Annif’s automatically generated suggestions. At Yle, Annif is retrained and updated weekly.

The Dissemin sevice uses Annif. Through the Dissem.in web page researchers and authors of scientific papers can check whether or not their publication is open access. Dissemin can also suggest open access platforms for the publication. It also helps in the upload process: here it offers the user suggestions that Annif gives based on the HAL classification to work with.

Annif has been tested and used with quite some interest both in Finland and abroad. It has been involved in for example an interesting Dutch research project called Entangled Histories that focuses on early modern ordinances (law texts), take a look at this blog post to find out more! The Research department of the National Library of the Netherlands has also used Annif as a part of their own larger tool1 for automated indexing, see this documentation.

After extensive testing, the German National Library (DNB) adopted Annif as the core of its automated subject indexing system Erschließungsmaschine (EMa). Also, after a comprehensive testing phase, ZBW – The Leibniz Information Centre for Economics took Annif to use as a part of their automated indexing service AutoSE  (read more here).

Feel free to join the email list / Google group annif-users - a forum for the groving number of people and organizations interested in Annif and automatic subject indexing!